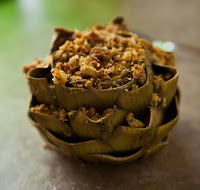 I'm old enough to say I've seen them all.
Okay, it's not like being able to say "I've seen every Christmas".
But still, it makes me feel like I've been part of an era.
Yeah, it doesn't take much.

When the first Earth Day was held in 1970 I was a student at Pratt Institute.
Classes were cancelled for the day.
We had a big inflated balloon on campus.
We entered it, bounced around a bit, and celebrated that we were living on earth.
Yeah, like we had a choice.

What can I say?
We were children of the 60s and it didn't take much to impress us.
I mean, compare what the performers did in Dream Girls to what teen stars do now.
We'd have run screaming out of the building if we'd seen fireworks onstage.

Back to Earth Day…
Veggies grow on the earth.
Time to eat a veggie.

Paulie Walnuts' chapter My Nucci in Artie's The Sopranos Family Cookbook has a nice veggie recipe, stuffed Artichokes - Carciofi Ripieni.
Yeah, he stuffs it.
Just like my Ma would.

Hint:
To remove the choke, use a small knife to scrape out the fuzzy leaves in the centre.

Rinse them well under cold water.
Cut off the bottom stems so the artichokes can stand upright.
DON'T THROW THE STEMS AWAY - you need them for the stuffing.
Peel off the tough outer skin of the stems.

Snap off the small leaves around the base of each artichoke.
With the kitchen shears trim off the pointy tips of the remaining leaves.
Removing the choke is optional.
Place the artichokes in a pot large enough to hold them upright.

Cover the pot and place over medium heat.
Bring to a simmer and reduce heat to low.
If the water evaporates away add more warm water so they won't scorch.
Cook until the leaves can be easily pulled out, about 45 minutes.
Serve warm or at room temperature.

Would I make Carciofi Ripieni again?
No.
Well, without anchovies and olives they're kind of blah.
I prefer my Ma's recipe.

One recipe down.  Nineteen more to go.