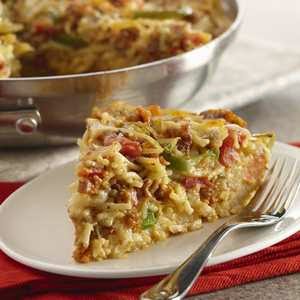 Back in 2010, in that second post, I also compared a second recipe.
Like I said, I was a beginner and, in addition to being snide, I wasn't pacing myself.
Okay… now I know better - one recipe per post.
Less risk of getting lost in all the directions, too.

Carmela's recipe for Spaghetti Pie in Entertaining with The Sopranos is a little pricey.
Like she's trying to prove they have the bucks.
When Ma made Spaghetti Pie it was either Friday or time to pay the heating oil bill.

Ma's recipe is also safer for folks watching their cholesterol intake and blood pressure.
Carmela said, You will not need salt, because the meats and cheeses are salty.
You've been warned.

Carmela's recipe calls for spaghetti or bucatini.
Personally I can't see the bucatini, which is thick pasta.
Ma would've used vermicelli.
Use what you have.
Just adjust the boiling time for the pasta.

In a large pot place
4 quarts water
salt to taste
Bring to a boil.
Add
1 pound spaghetti or bucatini
Cook, stirring frequently, until the pasta is al dente.
Drain the pasta well and place it in a large bowl.

Meanwhile, preheat the broiler.
Place the skillet under the broiler to brown the top (about 3 to 5 minutes).
Slide a spatula under the pie to loosen it.
Tilt the pan near a serving platter and slip the pie onto the platter.
Cut into wedges.
Serve hot or at room temperature.
Posted by Margaret Ullrich at 6:47:00 AM