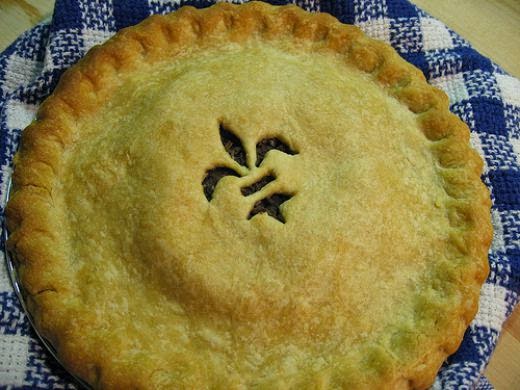 Summer is just zipping along.
On June 24, folks in Quebec will be celebrating the holiday Saint Jean Baptiste Day.
According to the Jesuits, the first celebrations occurred on the banks of the Saint Lawrence River in 1636, with a bonfire and five cannon shots.

Winnipeg has a very strong French community across the river in St. Boniface.
So, when we moved to Winnipeg in 1975, we heard about  Saint Jean Baptiste Day.
One of our new neighbours gave me a Tourtiere Pie recipe.

Wanting to take part in the local festivities - and, as any other Maltese, eager to learn a new meat pie recipe - I decided to try it.
I invited some friends to come and celebrate.
And that’s a nice Canadian thing to do.

Cook, stirring occasionally, over medium heat until mixture boils.
Reduce heat and simmer until meat is cooked, about 5 minutes.

When the meat is almost done cooking, preheat oven to 425º F

Roll out
400 g flaky or puff pastry
Line the bottom and sides of a baking dish with 3/4 of the pastry.
Pour in the meat mixture.
Cover the top with the remaining pastry.
Brush the top of the pastry with
1 beaten egg (or milk)
Prick the top pastry with a fork so steam can escape.
Cover edges of pie with strips of aluminum foil.
Bake for 20 minutes.
Remove foil and return to oven.
Bake an additional 20 minutes until golden brown.
Let cool for about 10 minutes before slicing.

Tourtiere Pie is a delicious meat pie recipe.
But to be honest, I prefer Ma’s Timpana recipe.
As I once said
Maltese cooking is heavy on simple carbs.
Maltese go beyond simple into downright retarded.