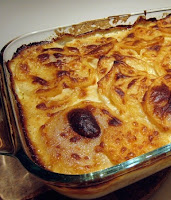 Many Maltese feel that a meal isn’t complete without a starch, preferably of the wheat type.
A few years ago we were vacationing in Halifax with my parents.
The only nearby restaurant was a Chinese one.
Pop announced he didn’t like Chinese food “Because they don’t serve bread.”
Noting that lack - and the rumbling of our stomachs - we and Ma decided to eat there anyway.
Pop came along… but he wasn’t happy.

Quite a few other people must feel the same way about the importance of starches, especially pasta and rice.

The post with the recipe for Ma's Imqarrun il-forn (Baked Macaroni) has had 8,313 visitors, while her recipe for Ross il-Forn (Baked Rice) has been used by 4,350 people.
Ah, pasta and rice… got to love them!

If you’re trying to cut back on pasta and rice, potatoes are a happy alternative.
They are vegetables, but can be counted on to add that nice bit of heft to any meal.

I recently posted a recipe for Ma’s Tres Leches Cake, a sneaky way to get more calcium rich dairy products into the kiddies.
If you’re looking for another sneaky milk recipe, Scalloped Potatoes is a good one.
Scalloped Potatoes is one of those lovely recipes that, along with being a bit devious, can be varied to suit your preferences, and whatever you have in your cupboards.

Don’t like onions or prefer chopped green onions? Suit yourself.
Want to use Cheez Whiz or prefer more or less or no cheese? It will be fine.
Like a dash of garlic or nutmeg, or more or less pepper? No problem.

Have a leftover sweet potato you want to use? Sure, add a few slices to the pan.
Only have some frozen hash brown potatoes?
Stir them into the sauce and cut the baking time down to 30 minutes, uncovered.

In a rush? Microwave the potatoes until they are about half cooked. Then slice them and add the baked slices to the sauce and bake for 30 minutes, uncovered.

This recipe will also work with condensed cream of mushroom or broccoli soup.
If you don’t have a tin of cream soup on hand, coat the potato slices and onion slices with flour, place them in the greased pan, and add the remaining ingredients, then use 1 1/2 cups of milk in place of the soup.

Want some meat with your potatoes?
Top the potatoes with what’s on hand. Pork chops or ham slices work particularly well.
If they are thick pieces just give them a check to be sure they’ve cooked through before serving.

Chop
3 slices bacon (optional)
In a large bowl combine
1 10 ounce can of condensed cream of mushroom soup
1 Cup shredded cheddar cheese
1/2 cup sour cream
1 teaspoon black pepper
Add the sliced potatoes and onion
Toss to evenly coat.
Scrape the mixture into the prepared pan.
Sprinkle the chopped bacon pieces over the potatoes and cover with aluminum foil.
Bake 30 minutes.
Remove the foil and bake another 30 minutes, or until the potatoes are tender.

About the sky later this month, thanks to the folks at The Farmers' Almanac…

May 12 - The waning gibbous Moon is at apogee, its farthest point from Earth.
(Apogee = Away)

May 13 - Look to the southeast in the late evening to see the  Moon and the planet Saturn paired up on the horizon. See if you can also spot the star Antares to their right. You can also spot this same trio in the western sky before dawn.

May 17 - Mercury, the planet nearest to the Sun, reaches its greatest elongation of 26°, the farthest west of the Sun it gets in 2017.

May 21 - Before sunrise look to the eastern horizon to see the waning crescent moon with Venus right above it. Mercury is also up before dawn now, hugging the horizon.

May 23 - The International Space Station will be making a number of passes across the United States and southern Canada and can be viewed several times during a single night.
For a complete schedule of visible passes over your hometown, click here.

May 25 - New Moon, 3:44 p.m. The Moon is completely invisible to the naked eye. The Moon is also at perigee, its closest point to Earth for the month. This means the closest supermoon of 2017 is a New Moon, and won’t be visible!


May 27 - Look to the southeast to see the ringed planet Saturn near the bright star Antares, Heart of the Scorpion, in the constellation Scorpius. Both Saturn and Antares rising into the eastern half of the sky (southeast as viewed from the Northern Hemisphere) by early-to-mid evening in late May 2017.
Posted by Margaret Ullrich at 8:15:00 AM