Toast Canada's 150th Birthday with a Caesar on Victoria Day 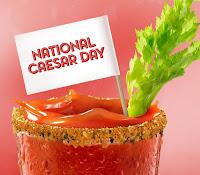 This year Canada is 150 years old!

The Caesar Cocktail was created in Canada.
National Caesar Day is the Thursday before the Victoria Day long weekend, the kick-off to our long awaited summer.
Why not toast Canada’s 150th birthday with a Caesar Cocktail or two!

Ah, the Caesar Cocktail… it was one of those great moments in Canada’s history…
Walter Chell wanted to celebrate the opening of the Calgary Inn’s new Italian restaurant in 1969.
His invention - the Caesar Cocktail - quickly became a popular mixed drink.
It’s been said that over 350 million Caesars are consumed annually in Canada.

Chell said his inspiration came from the Italian dish Spaghetti alle vongole, spaghetti with tomato sauce and clams.
He thought that if the mixture of clams and tomatoes made a good sauce it would make a great drink, so he mashed a few clams and then mixed the goop with vodka and other ingredients.
Brilliant or what!!
Well, Chell was a genius.
The drink was an immediate hit with the folks who went to the Calgary Inn.
Within five years the Caesar became Calgary's most popular mixed drink.

Okay… here’s where it gets Karmic.
In 1970 Motts was developing Clamato, a mixture of clam and tomato juices.
That’s right, this happened one year after Chell created his cocktail.
Like I said, Karmic.

Clamato wasn’t as popular as Chell’s Caesar.
But then somebody got a blast of inspiration and realized he could use Clamato to make the Caesar Cocktail.
An easier way to make an alcoholic drink?
Of course word spread like wildfire!
By 1994 half of all Clamato sales were made in Western Canada.
Motts claims that the Caesar is the most popular mixed drink in Canada.

The thing is, very few people outside of Canada know about the Caesar Cocktail.
In the states it’s only known in bars along the shared border.
Most Americans just make do with a Bloody Mary. How sad!

Some say the Caesar is a hangover cure.
A 1985 University of Toronto study showed that drinking a Caesar when taking aspirin could protect a person's stomach from the aspirin.


In 2009, the Caesar Cocktail’s 40th anniversary, a petition to make it Canada’s official mixed drink was launched. Calgary’s Mayor, Dave Bronconnier, celebrated the drink's anniversary by declaring May 13 as Caesar Day.
Contests held across Canada in 2009 encouraged variations. Some ideas:
the glass being rimmed with Tim Hortons coffee grinds
Caesars with maple syrup
Caesars with bacon-infused vodka
Hail, Caesar!!

Want something to eat? Serve your Caesar with a Caesar Salad.

The Caesar can be mixed in bulk and stored for a period of time before drinking.

Tabasco sauce and horseradish are frequent additions.
Vodka is occasionally replaced with gin, tequila or rum.
If you replace vodka with beer it’s called a Red Eye.
A drink without alcohol is a Virgin Caesar.

Moisten the rim of a highball glass with a lime wedge and dip into celery salt.
Add
1.5 ounces vodka
2 Dashes of Hot Sauce
3 Dashes of Salt and Pepper
4 Drops of Worcestershire sauce
5 ounces Mott’s Clamato
ice
Stir and garnish with a celery stick and a lime wedge.

Moisten the rim of a highball glass with a lime wedge and dip into celery salt.
Add
6 ounces Mott’s Clamato
1 to 1 1/2 ounces vodka
2 Dashes of Hot Sauce
4 dashes Worcestershire sauce
Celery salt
Freshly ground pepper
ice
Stir and garnish with a celery stick and a lime wedge.
Posted by Margaret Ullrich at 5:44:00 PM