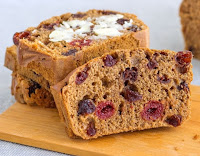 Can you believe it?
October is more than halfway gone.
That means it’s almost time for Halloween!

The holidays, especially the ones late in the year, were a hectic time for Ma.
Not only did she have a ton of Maltese recipes to prepare, but she also had to include recipes that we had learned from our neighbours and her co-workers, as well as those recipes that had become a part of Maltese traditions by way of Napoleon and the British navy.
Yes, Napoleon.
Recipes used every way they could to find their way into Ma’s recipe files.

One such recipe, along with its Halloween traditions, is Barmbrack, an Irish tea bread filled with raisins and dried fruits.
It was a popular item to enjoy at 4 o’clock in Malta, where it was served as toasted slices with butter, along with a nice hot cup or two of tea.

Barmbrack also has a Halloween tradition attached - the loaf is baked with small items mixed into the batter, and they are supposed to foretell a person’s future:


Hopefully each person’s slice would have one of the items.
Of course there was always the risk that a nice thick slice could hold a weird combination - such as both the pea and the ring - or nothing at all.
Well, cooking and holiday customs are not exact sciences!

You can use just raisins (your choice as to kind) or a mixture of raisins, currants, cherries and citrus peel.
This is a great recipe for using up bits left over from baking a fruitcake.

The dried fruit should marinate for 8 hours or longer.
You can prepare the fruit the day before and bake the next afternoon for your tea time.

Some dried fruits absorb more liquid than others so you might need to add more tea.
To be ready, have some extra cold tea on hand.

It also works fine replacing the egg with a tablespoon of applesauce.

Barmrack is best served fresh and warm but will last for up to five days.

I remember noticing that the grownups would often brush their slices with a syrup that wasn’t offered to us kiddies.
Our parents would also add a drop or two of the syrup to their tea.
Well, they needed some fortification for the upcoming holidays!

Place in a saucepan
1/4 Cup water
3/4 Cup granulated sugar
Juice from 1/2 lemon (about 2 Tablespoons)
Heat over a medium burner. Do not stir.
Swirling the pot occasionally, boil the mixture until it’s a dark golden brown.
When the mixture is dark, remove from heat and add
1/2 cup cold water
2 Tablespoons whiskey
Bring the mixture back to a boil.
Cook for 1-2 minutes, until everything is combined.
Lightly brush slices of bread with the syrup and add a nice spread of good butter.
It's also delicious in a cup of tea or coffee.

If there was time, Ma made this special butter for us kiddies.

Place in a bowl
1 1/3 Cups dried fruit
1 1/4 Cups cold strong black tea
Place the bowl in the fridge and let the raisins soak 8 hours or overnight.
After a few hours you could check to see if they need more liquid.

Pour the batter into the prepared pan.
Bake at 350º F for 1 hour.
If the top is browning too quickly, place tin foil lightly over the top.
It is ready when it’s golden brown on top and sounds hollow when tapped.

Serve warm with butter and/or jam.
Don’t forget to make a pot of your favourite tea or coffee.

October 21 & 22 - The Orionid Meteor shower peaks! This shower is the cosmic dust from the most famous comet, Halley’s comet. The meteors appear to emanate from a point near the Orion-Gemini border in Orion’s upraised club, hence the name. View overhead from 1 to 2 a.m. local daylight time until dawn; you may see 20-25 meteors per hour.
But the waxing gibbous Moon may interfere with viewing.

October 24 - The Hunter’s Moon will be astronomically full at 12:45 p.m. In this phase, the entire disc of the Moon is fully illuminated by direct sunlight. Though the Moon is only technically in this phase for a few seconds, it is considered “full” for the entire day of the event and appears full for three days so you can get out and enjoy it! Learn more about how this Moon got its name in our short video.

October 31 - The second of two Last Quarter Moon phases this month, at 12:40 p.m. In this phase, the Moon looks like a half-Moon in the sky. One-half of the Moon is illuminated by direct sunlight while the illuminated part is decreasing, on its way to the New Moon (invisible) phase.


The Last Quarter Moon is at perigee (twice in one month!) at 4:22 p.m., meaning it’s at its closest point to Earth in its orbit. The reason we’re seeing the second Moon at perigee is that the lunar calendar is 29.5 days long, which is shorter than our Gregorian calendar.
Posted by Margaret Ullrich at 11:49:00 AM