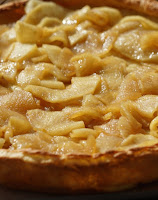 I recently posted the recipe for Yorkshire Pudding.
It’s been around a long time, and I really think it has inspired a few variations.
Cousin recipes, if you like.

German Oven Pancake is similar to Yorkshire Pudding.
But you can make a meal of it and serve it as a brunch.
You can also serve it as a dessert

If you are feeding a crowd follow Ma's example.
She found the recipe easy to multiply and that it could be baked in pie plates.
If your plates are glassware, as Ma’s were, reduce the temperature by 25º F to 325º F.

Here’s how Ma made her pancakes:

Have on hand 4 9-inch pie plates

In each pie plate place
2 Tablespoons butter
Place the pie plates in the oven to melt the butter.

About the filling... you’re going to need more filling than in the recipes below.
Double or triple the recipes, or choose two or three and give your family a choice.
If you’re in a rush, canned pie filling can also be used.

The Apple Filling can also be made using peaches, nectarines or berries.
If you're using blueberries in the Berry Filling use lemon juice instead of orange.

If you want the pancakes to be more of a meal, they can also be served in the pie plates - either as is or rolled - one per person, with your choice of filling.

Melt in a 10 inch oven proof skillet
2 Tablespoons butter
Pour in the batter.
Bake 25 minutes.
Remove from oven, loosen and place the pancake on a platter.
Add filling, roll up, cut into portions if you wish to, and serve.

Jam Filling
Spread on a cooked pancake
1/2 to 3/4 Cup plum jam (or another jam, such as strawberry)
Roll up and top with
1/4 Cup sour cream
2 teaspoons sugar
2 Tablespoons toasted walnuts
Slice and serve.

Combine in a small bowl
1/3 Cup sugar
1/4 teaspoon cinnamon
1/8 teaspoon nutmeg
Sprinkle the sugar mixture over the cooked apple slices.
Cover and simmer another 5 minutes.
Uncover and cook 5 minutes more.
Spread the fruit over the cooked pancake.
Roll up and sprinkle with
1 Tablespoon sugar
Slice and serve.

Berry Filling
Thaw in a saucepan
1 package (about 10 ounces) frozen raspberries or strawberries
Mash with a fork and heat.

Spread on the cooked pancake
1 Cup sour cream
Roll up and pour the cooked berries over it.
Slice and serve.

Yorkshire Puddings can be made even if you haven’t just cooked a large roast.
Really.
Bacon fat, lard, rendered chicken fat, and vegetable oil can also be used.
The different fats will give different flavours:
Bacon fat will give your pudding a salty, mildly smoky flavour
Beef drippings or lard will add a beefy flavour
Chicken fat will give a more delicate, yet still meaty, flavour
Vegetable oil is perfect for when you’re serving something vegetarian, like mushrooms

This recipe can be made using the pan in which you roasted the meat.
You'll need 1/2 Cup fat. Remove and save the rest of the drippings for another meal.
You can also make the pudding in pie pans, cast iron frying pans, or baking pans, or you can divide the fat between 12 muffin cups.
When pouring the batter into the pans or muffin cups the containers should be filled about 1/3 of the way.


If you’re using a glass pan, reduce temperature by 25º F.

When the meat is almost done, sift together into a bowl
1 Cup flour
1/2 teaspoon salt or 1/4 teaspoon kosher salt
Set aside.

Place in another bowl
4 eggs
1 Cup milk
Beat together until light and foamy.

Remove the roast from the oven and place the meat on a platter to rest.
Remove excess fat if using the roasting pan, or scoop out 1/2 Cup of drippings to add to the other pan(s).
Place the oven rack in the middle position.
Preheat oven to 425° F

Place in the pan(s) or divide in the muffin tins
1/2 Cup beef drippings or other fats (see above)
Put the pan(s) in the oven and get the fat hot.

While the fat is being heated, add the dry ingredients into the egg / milk mixture and stir until blended with no lumps.

Carefully take the pan(s) out of the oven and pour in the batter.
Put the pan(s) back in the oven.
Bake until the pudding is puffed and golden.
This can take 12 minutes in the muffin tins, or 15 to 20 minutes in the other pan(s).


This is delicious with gravy, if you’ve made some.

September 21 - Venus reaches greatest brilliancy on September 21st, shining at magnitude –4.8 and casting an eerily brilliant light from low in the west. Since the end of February, it has been a very prominent object in the evening sky soon after sunset.

By month’s end the Red Planet sets well before the end of twilight. Its sunlit hemisphere currently is oriented mostly away from the Earth, so it appears as a crescent. Telescopic observers may want to keep Venus under surveillance and watch this crescent grow rapidly thinner and longer. Even with steadily held binoculars you might discern it, especially toward the end of the month, but, unfortunately, Venus may be a bit too low after sunset to show a steady image.

By mid-October, Venus sets only a half-hour after the Sun and then will be gone. It will pass between the Earth and the Sun on October 27th, then a couple of weeks later it will reappear in the predawn sky as a “morning star”.

September 22 - The Autumnal Equinox, 9:54 p.m. While there’s nothing to see in the sky, this is the official first day of Fall!

September 24 - Full  Moon at 10:52 p.m. At this phase, the visible Moon is fully illuminated by direct sunlight.
But is it the full Harvest Moon or the full Corn Moon?
Because this full Moon is nearest the autumnal equinox (September 22 in 2018) so it is the Harvest Moon. When the September full Moon is not the Harvest Moon, we call it the Corn or Barley Moon.
Posted by Margaret Ullrich at 7:47:00 PM