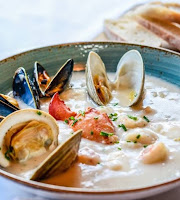 On Tuesday we were thrilled to be walking on snow-free concrete.
We were sure that Spring was just a few days away.
Manitoba Merv had promised us an early Spring.
He couldn't lie to his fellow citizens.

Yeah, well, this is Manitoba, and it’s never wise to put away the snow shovels until the middle of May.

On Wednesday afternoon it started snowing, the heavy wet type, and by Thursday morning we had received another 10 to 13 cm of fresh snow.
We were not amused.

I packed away the light, Spring type recipes and made a pot of chowder.

As a kid growing up in Queens, New York I loved Manhattan Clam Chowder.
I had first tried it in the restaurant at Jones Beach.
It was served with a small bag of little round crackers and was much better than the soup one got from the Campbell soup can.
I have no idea why either item was called a chowder.

Soup is a rather light weight thing, made by adding meat and/or vegetables to a liquid, such as water or stock.
A chowder is a creamy soup that can be almost as thick as a stew.
Like a soup, chowder can be seafood or vegetable, such as corn or potato chowder.
But, unlike a soup, the liquid is thickened with potatoes, cornstarch or flour.
Manhattan Clam Chowder is definitely not thickened.
False advertising, for sure.

About Monday’s full moon, the Full Worm Moon...
Not one of the nicest names for a full moon, but it got stuck with that name because the ground is thawing and earthworm casts are appearing, attracting robins.
U. S. tribes called it the Full Crow Moon, since the cawing of crows announced the end of winter, while other folks, mostly in the east, called it the Full Sap Moon, since it was time to start tapping maple trees.

In Manitoba natives knew they’d still have snow and called it the Full Crust Moon, since the snow thawed during the day and froze at night, becoming crusted.

The European settlers called it the Lenten Moon, since it usually happened after Lent had begun, and it was considered the last full Moon of winter.

On March 9 and on April 7 we’ll be having very large full moons, known as super moons, which will appear about 14% larger and 30% brighter than a normal full moon.
April's supermoon will be the bigger of the two, since the moon will be at its closest point to Earth.

Hopefully the snow will be gone by then.

Starchy russet potatoes release the starch into the chowder and thicken it.
Red potatoes and Yukon golds aren’t as starchy, but will do if that’s what you have.

About the fish… a mix of salmon, halibut and cod makes a nice blend.
If you only have one or two of them, that’s fine.
Just don’t use something like sole - it will disappear into the creamy base.
Relax about the amount of seafood you're adding. The recipe is just an estimate.
A chowder is just a type of soup, not a cake.

If you want to get a bit fancy you could replace some of the fish with lobster tails.
Add with the shrimp, clams and mussels.

About the cauliflower chowder…
You can leave the bacon out and replace it with 4 Tablespoons olive oil.

Place in a large pot
1 Tablespoon butter
Melt butter over low heat.
Add the diced celery and onions.
Sauté for about 5 minutes, or until onions start to brown.

While the potatoes are cooking cut about 12 ounces of fish into spoon-sized chunks. (see hints)

Place in another large pot
2 Tablespoons butter
Melt butter over medium heat.
Add the fish chunks.
Cook until fish is opaque and flakes easily with a fork.
Add
6 shrimp
1/4 C shelled clams
box of mussels in wine, undrained
Once the mussels have opened (discard any that did not open), transfer the seafood into the chowder base.
Simmer 3 minutes.
Ladle into bowls.
Place dill and a dab of butter on each serving (optional).
Serve with crusty rolls or bread.

Place in a large pot
the bacon pieces
Cook over medium heat, until crispy.
Remove the bacon and drain all but 3 tablespoons of fat from the large pot.

Add to the large pot the onion, carrots, and celery.
Season with salt and pepper.
Cook the vegetables until soft, about 5 minutes.
Add the minced garlic and cook 1 minute.
Add
2 Tablespoons flour
Stir in to form a thin paste, and cook about 2 minutes more.

Add
the chopped cauliflower
1 teaspoon dried thyme
4 Cups vegetable broth
1 Cup whole milk
1/2 Cup heavy cream
Bring to a boil.
Reduce heat and simmer until the cauliflower is tender, about 15 minutes.
Season with salt and pepper.
Garnish with the cooked bacon pieces before serving.
Ladle into bowls and serve with crusty rolls or bread.
Posted by Margaret Ullrich at 4:16:00 PM