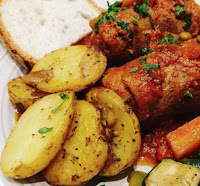 On Saturday I posted Carmela Soprano's Veal Rollatini with Peas.
The whole idea was: take a bland piece of meat and wrap it around something with a bit more flavor.

Okay... everybody, including Maltese, has been doing something like that for a long time.
If you're on a budget, it's called "stretching".

Most people don't use meat for a stretcher.
That's kind of like gilding the gold.
The meat should be enough as is.
Especially meat as expensive as veal.
If you can even find it.
Not everybody has Carmela's 'resources'.

Normally stretching is a matter of grinding meat and adding bread crumbs to soak up some flavor and give the impression that the meat serving is bigger.
Every chef knows, you eat with the eyes first.
If you see a big enough portion, that's half the battle.

This is a Maltese take on the Rollatini.
No veal.
Beef - your choice of cut.
The filling uses up bits you have leftover.
You can adjust to use up what you have.
That's just our way.

Beef Olives / Braġoli
for the sauce

Lay out
1 pound steak, pounded as thin as possible
Cut into portions.
Put some of the pork mixture in the middle of each portion and roll up.
Either pin with a toothpick or tie them closed with a string.
Add to the tomato sauce and simmer for 30 minutes.

Prepare
Salad (what's in season) or
Frozen vegetables, your choice

Serve the sauce with the spaghetti as a first course,
and the beef olives as a separate dish with salad and fried potatoes.

Here is a recipe for Ma's budget version of Braġoli.
Posted by Margaret Ullrich at 10:24:00 AM