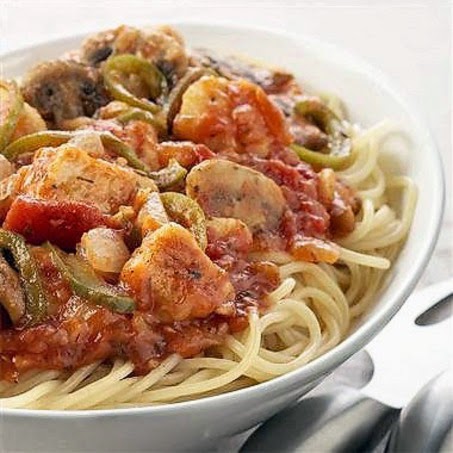 The desserts I posted this week - Torta Caprese, Pear and Grappa Pound Cake and Tortoni are great, both for special and regular meals.


But they aren't really a meal in themselves.
Time to find a main course.

Charmaine Bucco, Artie's better half, has a chapter in Artie's The Sopranos Family Cookbook that has recipes which are perfect for big family meals.


Her recipe for Baked Chicken Caccitore - Pollo Cacciatore al Forno - is in her chapter Cooking for the Whole Famiglia.
And it is perfect as part of una bella mangiata.

Would I make Pollo Cacciatore al Forno again?
Sure.  The recipe for four gives us leftovers for a second meal.
And the crowd pleaser recipe is handy for family get togethers.
Charmaine's Caesar Salad is good for a crowd, too.

One recipe down.  Thirteen more to go.