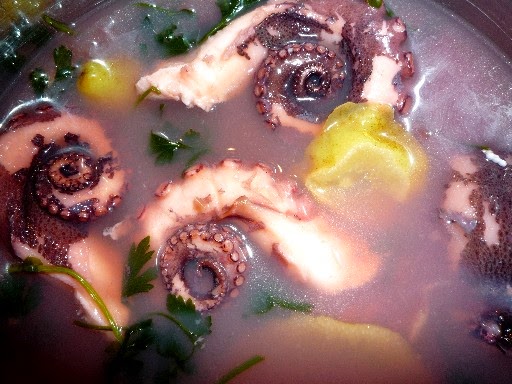 Okay, some fish can be easily replaced.

Bluefish can replace lampuki in Ma's recipes.
Haddock is another good substitute.

But, then there is the octopus situation.
Ma sometimes made Stuffat tal-Qarnit.
Qarnit Stew.
Qarnit is Maltese for octopus.
Octopus is the stuff of legend.

And sometimes the stuff of science fiction.
Check out It Came from Beneath the Sea, a dandy 1955 Sci-Fi film about a giant octopus that attacked San Francisco.

A few years ago I mentioned that Carmela makes Octopus Salad.
It's a green salad topped with bite-sized pieces of cooked octopus.
The fun part is finding octopus if you don't have Carmela's connections.
That and cooking it until you can actually bite into it.

If your grocery store is like mine you'll find a bag labeled Seafood Combination.
There are tiny octopus tentacles in it.
Not quite the same, but beggars can't be choosers.

A bit of octopus trivia…
Octopus is known in Hawaii by Hawaiian or Japanese names (he'e and tako).
In Hawaii Octopus is also a popular fish bait.
Imagine having it so readily available!

Octopus is a common food in Mediterranean cuisine.
On the Tunisian island of Djerba, people catch them by taking advantage of the animals' habit of hiding in safe places. In the evening they put ceramic pots on the sea bed. The next morning they check them for octopuses.
In the Greek islands octopuses are often caught by spear fishing close to the shore.

No matter how you catch them, octopus needs to be cooked a good long time.

Clean and wash
octopus, about 2 pounds
Cut in small portions.
Simmer in salted water until tender.

While the octopus is cooking, start the stew.

Simmer gently for an hour.
You should stir it occasionally.
Add more liquid (either water or wine) if it becomes too dry.