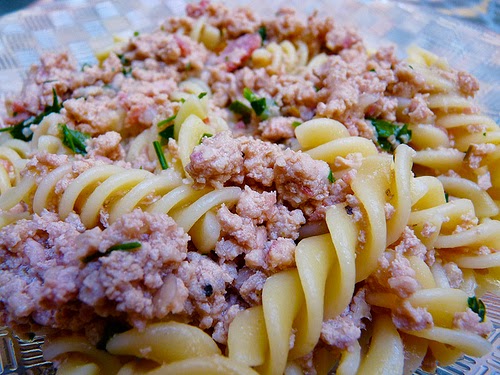 Around here the weather has taken a turn.

Summer has come to an end.
A light salad just isn’t going to feel like enough food for dinner.
It’s time to start making stews and casseroles.

Ma’s Ghagin Tork jew Griek is easy to make.
It’s similar to serving the Italian Bolognese sauce on pasta.
The problem is Ghagin isn't quick to prepare.
The sauce does take a couple of hours.
It’s worth it.

The sauce serves 6 to 8.  Don’t panic at the amount of sauce.
You can freeze half for another day.
The sauce can also be made using only pork or beef.

If possible allow the sauce to sit for at least 30 minutes before serving.
It’s best to make it the day before, then reheat the amount you need to serve.

The sauce is thick and goes well with pasta that has a bit of heft, such as fusilli.
Spaghettini would be overwhelmed.

Another variation calls for browning the meat, and not adding stock.
It’s only cooked for an hour instead of two.
Cream and more chopped parsley is added to the sauce before serving.

As everyone knows, if you were to ask two Maltese women how to cook something, you would get at least four recipes.
And they’d each be great!!

Place in a dutch oven
1 Tablespoon olive oil
1 Tablespoon butter
1/4 pound bacon, chopped
1 pound ground lean beef
1 pound ground lean pork
4 medium onions, chopped
5 garlic cloves, chopped
1/2 teaspoon pepper
1 teaspoon oregano
2 bay leaves
Chicken stock to cover the ingredients.
Cover and simmer over low heat.
Stir occasionally for the first 15 minutes so the meat is not in a solid piece.
Cover and simmer for at least another 1 to 2 hours, stirring occasionally.
The sauce is done when the oil and liquids rise to the surface.
Taste and adjust the seasoning.

About a half an hour before serving, in a large pot place
4 quarts water
salt to taste
Bring to a boil.
Add
1 pound pasta
Cook, stirring frequently, until the pasta is al dente.

Scoop out and set aside about half of the sauce.
Drain the pasta and place it in the sauce that is still in the pot.
Toss the pasta until it is coated.
Add
!/2 Cup fresh flat-leaf parsley, chopped
!/2 Cup grated Parmesan cheese
1 Tablespoon pepper