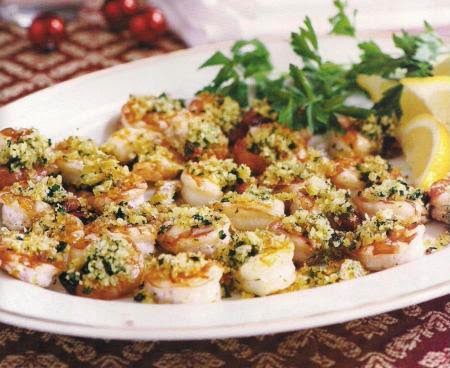 It was one of the early Carmela recipes from the Entertaining with The Sopranos cookbook that I had posted about.
About is the operative word.

When I started posting Carmela’s recipes in 2010 I wasn’t particularly big on details.
Just a chatty piece, with a quick description of the ingredients and comments about how much Paul and I enjoyed eating it.
I know, big help.

Shrimp Aragonate can be served either as an appetizer or as a main course.
Either way, it’s quick, easy and delicious.
And Paul and I really liked it.

In the recipe Carmela used fresh bread crumbs made from Italian or French bread, with the crusts removed.
I used store-bought unseasoned bread crumbs.
The box didn't say what country they came from.
I would guess Canadian.

What can I say?
Paul and I really liked it.

Arrange on the oiled baking pan in a single layer
1 1/2 pounds large shrimp, shelled and deveined
Curl each shrimp into a circle.

Spoon some of the bread crumb mixture onto each shrimp.
Bake 10 minutes - the crumbs should be browned and the shrimp should be cooked through when cut in the thickest part.
Place the shrimp on a large serving platter.
Garnish with the lemon wedges.


Serve hot or at room temperature.
Posted by Margaret Ullrich at 8:47:00 AM