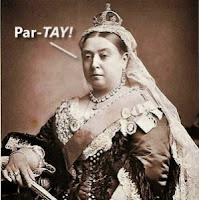 Here in Canada we’re having a three day weekend to celebrate Queen Victoria’s birthday.
She was Queen of the United Kingdom of Great Britain and Ireland and Empress of India during the nineteenth century.

Okay… this is a little complicated.

Queen Victoria was born on May 24, 1819.
But the third Monday in May was picked to be her official birthday so that everyone could have a proper three day weekend in which to celebrate.
It’s time to par-tay!!

A bit of royal trivia…
Since September 24, 1896 Queen Victoria has had the longest reign of anyone - either kings or queens - for the British Isles.
Her great-great-granddaughter Elizabeth II on September 9, 2015, will, God willing, surpass Queen Victoria’s reign.
What a year for her royal majesty: a new great-granddaughter, Princess Charlotte, and setting a new record!
Yes, indeed, it’s time to par-tay!!

I’ve been getting used to being a senior citizen.
Actually, it’s quite nice.
I’ve been taking advantage of a few of those senior discounts.
And who doesn’t like a bit of a bargain?

About a month ago I posted about turning 65 and the recipes for Champagne cocktails.
I mentioned that the flat glass that looks like a bowl is called a Victorian coupe.
It had nothing to do with Queen Victoria.
According to legend, it was designed using a mould of Marie Antoinette's left breast as a birthday present to her husband, Louis XVI.
That girl also knew how to par-tay!!

In honour of this being the birthday of Queen Victoria - more or less - we ought to have a drink with a bit of a royal connection.
How about a Bloody Mary?

The name Bloody Mary is associated with Queen Mary I of England.
She was called that in Foxe's Book of Martyrs for her... well... bloody efforts to re-establish the Catholic Church in England in the sixteenth century.

The Bloody Mary recipe is not nearly that old.
Fernand Petiot claimed to have invented the Bloody Mary in 1921 while working at Harry's New York Bar, a favourite Paris hangout for Ernest Hemingway.
No one knows why he picked that name.

A Bloody Mary is a popular cocktail that is open to variations.
It can contain combinations of other spices and flavourings including piri piri sauce, beef consommé or bouillon, horseradish, olives, cayenne pepper, and celery salt.

Some say a Bloody Mary can cure a hangover.
Its heavy vegetable base settles the stomach, the salt replenishes lost electrolytes and the alcohol relieves the aches.
Others just think the alcohol slightly numbs the pain.
Its reputation as a cure led to the drink becoming a popular brunch drink.
A perfect drink for a holiday weekend!

Want an alcohol-free drink with your brunch?
If you don't add the booze you'll be enjoying a Virgin Mary.

Don't even think it.

Don’t have any celery?
No problem, if you have celery seed.
It has the flavour of celery, but doesn't wilt or need chopping.
A good thing to keep in your pantry.

Add a bit to your Mary and you won’t have to cope with a dripping celery stalk.
Perfect, right?

About the moon next week…
According to the Farmers Almanac:

On May 19 you’ll be able to see a tiny sliver of the waxing crescent Moon low in the west, below Venus. Start looking west after the Sun sets.

On May 22 Saturn will be in opposition, that is 180° from the Sun in relationship to the Earth. This is the best time to view a superior planet – one beyond the Earth’s orbit.

On May 23 Saturn will be closest to Earth, the closest it will be in 2015. The waxing crescent Moon is also very close to Jupiter.


Plant flowers and vegetables that bear crops above ground during the waxing moon, from the day the Moon is new to the day it is full.
Posted by Margaret Ullrich at 8:24:00 PM