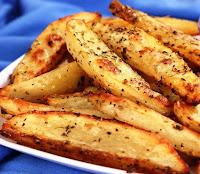 A few days ago I posted the recipe for Ma’s Greek Spinach & Cheese Quiche.
I mentioned that, if you’d like to have a meal without doubling up on the quiche, you could serve it with a salad.

When we find a Greek restaurant or place in a food court, they usually serve spanakopita with a salad, rice and roasted lemon potatoes.

The roasted lemon potatoes are a little different from Ma’s Roasted Potatoes, which she usually served with her Lemon Chicken.

Somehow word got around so that the Greeks and Maltese learned that lemon was a great way to add flavour to a dinner.
Hope you enjoy a lemon flavoured dinner, too.

Sprinkle the spice mixture over the potatoes.
Mix until all of the potatoes have been seasoned.

Pour over the potatoes
1 1/4 Cups water
1/3 Cup lemon juice
Bake for 30 minutes.
Remove the pan from the oven and stir around the potatoes so that the darker potato edges are turned under.
Bake for another 30 to 45 minutes.

On April 7 there’ll be a new moon.

On, April 8, about 45 minutes after the Sun sets, look very low near the western horizon. If the sky is very clear, you should be afforded a view of a delicately thin waxing crescent Moon, just about 1½ days past new phase. To the lower right of the thin lunar sliver will be the planet Mercury.

This little planet nearest to the sun is almost always confined to the day, when it cannot be seen. So it has to be looked for during its twilight appearances, but these are briefer, generally occurring during the brightest time of twilight and the brightest and lowest part of the twilight sky. Thus relatively few people have set eyes on it; there is even a rumor that Copernicus, living in misty northern Poland never saw it.

You simply must know when and where to look, and find a clear horizon. An excellent window of opportunity opens on Monday, April 4th and will remain open through perhaps April 25th. During this time Mercury will stand almost straight above where the Sun has set. Initially, Mercury shines nearly as bright as Sirius, the brightest star in the sky, but thereafter it gradually fades in brightness.
Posted by Margaret Ullrich at 10:28:00 AM