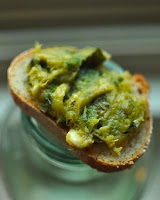 We live in an amazing world!
Thanks to the internet I’ve been able to meet folks from around the world, including fellow food bloggers.
A blogger from New Zealand, Carole, recently posted about getting ready for Christmas.
She mentioned that it’s almost summer there.

We’re currently having a blizzard, which isn’t unusual for Winnipeg in December.
But Carole’s post reminded me that sometimes my posts aren’t very helpful to some of my readers.
Sorry about that.
I hope this recipe for a Maltese dip is handy for the fine folks south of the equator.
Hope you enjoy it during the holidays!

This recipe dates from the time the Knights were in charge in Malta.
Most really traditional Maltese recipes are vegetarian, not because we were ahead of our time, or trying to be politically correct.
We just had more vegetables that meat to eat.
And we sure have a lot of courgette, also known as zucchini!

In the United States, Australia and Germany, the plant is called a zucchini, while in the United Kingdom, Ireland, New Zealand, the Netherlands and South Africa, France and Belgium it is called a courgette.

In the United Kingdom, Ireland and New Zealand, a fully-grown, matured courgette is referred to as a marrow.

Trivia…
Mature zucchini can be as large as a baseball bat. The longest zucchini was 8 feet 3 inches long and was grown by Giovanni Batista Scozzafava in Niagara Falls, Ontario and measured on August 28, 2014.

If the water evaporates away while cooking, add a little more.
Don’t overdo the water. You don’t want it to be soupy.
On the other hand, if it looks like there’s too much water, scoop out some.
Set the hot water aside just in case you need it to thin the dip.

You can also serve this as a side dish with steak, chicken or fish.

You can also add raw scrambled eggs to the zucchini mixture before you remove it from the heat. Then you can serve it as a brunch or a light lunch.

Place in a saucepan
the chopped zucchini
1 Cup fresh flat parsley, chopped
1 Tablespoon minced garlic
Add
1 Cup water
On medium heat bring the water to a boil, then reduce the heat and simmer 8 to 10 minutes, until the squash is tender.
Remove from heat.

Drizzle over the zucchini
2 Tablespoons extra virgin olive oil
Mash the zucchini and seasonings together.
Season with
salt and pepper to taste

Serve with bread. Ma’s Hobz is best!
A drizzle of oil is a nice touch.

December 8 – Earliest sunset of 2017 at 4º0 N. latitude. This comes two weeks before the winter solstice.

December 10 – Look to the east in the evening to spot the nearly-full Moon and Aldebaran, the reddish “eye of the Bull” (in Taurus) pair up in the sky.

December 11 – 13 – Bundle up for the annual Geminid Meteor Showers! These showers will peak on December 13, but that’s also the date of the full Moon so visibility may be hindered. They’re considered the best meteor showers of the year. The radiant — that spot in the sky where the meteors will appear to emanate — lies just below and to the right of the bright star Castor in the constellation Gemini (hence the name, “Geminids”).  Best viewing after midnight when the radiant point is high in the sky, until dawn, no matter where you are. You might even see an earthgrazer (meteors that last several seconds and often begin at the horizon).

December 12 – The nearly-full waxing gibbous Moon is at perigee, its closest point to Earth in its orbit.


December 13 – December’s Full Cold Moon will be astronomically full at 7:06 p.m. It appears full for three days. Learn more how this month’s full Moon got its name in this short Farmers’ Almanac video.
Posted by Margaret Ullrich at 10:29:00 AM