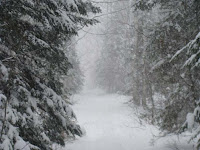 For another broadcast of our CKUW radio program ‘2000 & Counting’ we planned to reminisce about when we had gone out into the woods to chop down a Christmas tree.

Yes, this was, and is, a popular Winnipeg Christmas tradition.

And, yes, in Manitoba it can get cold enough to make trees brittle!

It was our first December in Winnipeg.

Paul and I had grown up in New York City. There people went to an empty parking lot where the trees had magically appeared, like the pre-wrapped ground beef at the local supermarket. No questions asked. No one wanted to get too personal with an ornament that would be out with the trash in a matter of weeks.

At the New York parking lot we'd browse, find a tree we liked and switch the price tag with the cheaper tree which no one liked. Then we'd carry the tree to the clerk, who gave us the fish eye as he noticed the fullness of such a "good find", sighed and took our money. The whole deal was done in ten minutes. Another Christmas had begun.

Apparently, that isn't good enough for Winnipeggers.
Oh, no, they have to get down and dirty with their holiday bushes.

I'll never forget how happy Paul was when he came home and told me we'd been invited to join his co-workers, a group of Winnipeggers, for a real, old-fashioned Christmas experience. If I'd had a clue I'd have realized that giving birth in a barn, unaided, would've been an easier old-fashioned Christmas experience.
We were going to chop down a real Christmas tree, just like our ancestors.

Well, my parents are from Malta, a sunny Mediterranean island. It just wasn't in my genes to know how to dress for a freezing, miserable, forced march through a blizzard-hit forest. The windchill - which I still didn't understand - was in the "exposed skin can freeze in 2 minutes" range.

That didn't sound good, so I said, "Thanks, but no thanks."

Somehow Paul convinced me that his entire future career prospects, our unborn children's college fund, our grandchildren's lives and our golden years' security and comfort would all go up in smoke if I didn't join in the mighty tree hunt.

His Jewish co-workers were going. Everybody, even that ditzy receptionist who always dressed like a showgirl wannabe with skirts up to there, was going.

So, we were going.

God, it was cold.
I thought I had dressed warmly.

That fink, the ditzy receptionist, showed up looking like the Michelin Man. She was ready to march to the North Pole for the perfect tree, if necessary. So were the three other women co-workers. The other wives - who all knew better - had begged off. One was even pregnant. Or so she said.

I was alone with four career women who were full of the 1980s "I am woman, hear me roar" career fever. While they talked shop I felt as welcome as a lump of coal in a kid’s Christmas stocking.

The Jewish co-workers - who I had hoped would keep the tree hunt frenzy within limits - had turned into lumberjacks. They were also ready to march to the North Pole for the perfect tree, if necessary.

After walking five minutes I couldn't feel my toes. We hadn't even gotten out of the parking lot. I was doomed.

I didn't know it could get that cold.

We marched. Finally, someone approved of a tree. The men chopped. The tree crashed. The branches that hit the ground broke off the tree.

I said, "The bare side could be placed against a wall."

The heat from their glares should have restored my circulation. It didn't. We marched. Someone approved of another tree. The men chopped. The tree crashed. It broke.

We were doomed to spend all day wandering like Flying Dutchmen on a quest to find the perfect unbreakable tree. The lot was littered with other broken felled trees. Some trees had landed across their comrades in a criss-cross pattern that looked like a cradle.
A cradle, something soft, something to receive and hold...

Hold it… something to catch a damn tree!

Dripping snot and tears had frozen my mouth shut. If I'd had the equipment I would've written my idea in the snow. I slapped my face trying to restore circulation to my lower jaw. Finally my lips parted. I clutched Paul's arm.

"Cradle... tree... cradle," I mumbled and criss-crossed my arms.

The women thought I was pregnant and wanted a homemade cradle. Thank God, months of marriage, misery and love had united Paul's mind to mine. Months of marriage had also taught us that Paul was no carpenter. He knew the homemade cradle idea was bunk. Paul caught on to my pantomime and told the others of my plan.

I didn't know it could get that cold.
I couldn't believe it.
Some fool was planning the next year's tree chopping expedition.
Posted by Margaret Ullrich at 7:22:00 AM

Email ThisBlogThis!Share to TwitterShare to FacebookShare to Pinterest
Labels: Being 66, Christmas, holidays, Margaret Ullrich, The Hump