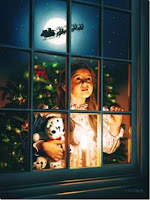 In 2004 I wrote this story and read it on our CKUW radio show '2000 & Counting - Older & Wiser'.
For a while it was our annual tradition.
I got a few e mails asking if I could post the original story.
Here it is… Merry Christmas!

Change follows us from the cradle to the grave. When I was five years old I was hit with a megadose of change - I moved to another town, got a baby sister, got to go to kindergarten and got Santa Claus.
Five years earlier my parents and I had emigrated from Malta to New York and settled in Corona.  We didn't have much choice.  Five of Pop's brothers and sisters lived in Corona. So, we had to live in Corona, too.
Corona was a little slice of Italy on Long Island.  The store clerks were bilingual: English and Italian.  The grocery stores in Corona were stocked with Italian necessities.  Almost everything in all the other stores had been imported from Italy.
Corona was where we learned how to be Americans.
Nonni's children, Betty and Angelo, had married two of Pop's siblings, Joe and Helen.  So, Nonni was a double Grandma in my family.  Since all my grandparents were in Malta, Nonni treated me as a grandchild, too.
Every Christmas Eve we gathered at Uncle Joe and Aunt Betty's home.  A whole corner of their living room was filled with Nonni's manger scene.  It was not just a shed with Mary, Joseph, three kings and one shepherd standing around Baby Jesus.  Nonni had a complete village with houses, trees, hills, paths, ponds and animals.  There were people walking around just minding their own business.  Some of the figures were really old and we couldn't play with them.  But each year Nonni added something new: a woman carrying a basket of eggs, a farmer carrying a head of cabbage, a man carrying a bundle of wood.  Nonni’s manger scene was better than any store window on 5th Avenue in Manhattan.
Dinner was a feast.  Fish was traditional - eel for the parents, bluefish for the children.  There was also soup, pasta and vegetables, followed by ricotta pie, anise biscotti, pizzelle and cuccidati cookies, strufoli, creamy roasted chestnuts and torrone candy.  My favourite was the huge golden mound of strufoli: tiny doughnut balls covered with honey and multi-coloured sprinkles.  After dinner we played games and our parents talked until it was time to walk to the Midnight Mass at St. Leo's.  After Mass we returned to Uncle Joe's for some panettone a holiday bread made with butter, raisins, almonds and citron.

Then Nonni would tell us to look at the manger scene for the surprise.  The blessed Bambino, Baby Jesus, had suddenly appeared!
Christmas Eve was a wonderful night.  But the big day for us children was January sixth.  The night before we had hung our stockings and waited for La Befana to bring us toys.

For those unfamiliar with the story, La Befana was a little old lady who had been sweeping her house when the Wise Men knocked on her door.  They were looking for Baby Jesus and asked La Befana for directions.  They then invited La Befana to join them.  The old woman refused, saying she had work to do.
When it was dark, a great light and angels appeared in the sky.  La Befana realized that the Wise Men weren't kidding about somebody special being born that night.  Broom in hand, La Befana tried to catch up with the Wise Men.  She never found them or Baby Jesus.  Every year she searches for Baby Jesus and leaves presents for good little boys and girls.

La Befana took care of me for four years.  Then we moved to College Point so we could live closer to Lily Tulip where Pop worked.  Then it was time for my sister to be born.  While Ma was in the hospital I stayed with Aunt Betty, Uncle Joe and their daughters, Mary Ann and Carol Lynn.  It was nice living in Corona again.  The next day, Nonni diNoto took me to the local 5 and 10 and gave me a quarter.
"Buy for sister."
I didn't have any idea what a baby sister would want.  I liked westerns, so I grabbed a toy gun.
"No.  Buy a rattle."
A rattle?  That sounded boring, but I bought a pink plastic rattle.
In those days children were not allowed to visit anyone in the hospital.  When Aunt Betty visited Ma, she gave the rattle to my new sister.  I waited outside the hospital and waved to the window of Ma's room.  When Aunt Betty returned she had a gift from my new sister for me: three pieces of chocolate.
Well, wasn't that nice of her.  Not as nice as a toy gun, but maybe that was all she could get from where she'd been.

After Rose was born we didn't go to Corona as often.  It was easier to walk to the local church instead of driving to St. Leo's.  I missed seeing my family.
That September I started kindergarten in St. Fidelis School.  Some of the good sisters had wanted to travel and meet exotic heathens in far away places.  Well, they almost got their wish.  I was the first Maltese child they'd ever seen.  College Point had been settled by Irish and German families.  It was time for me to learn about America through their eyes.
As Christmas approached, the windows of the German bakeries were filled with the most beautiful cookies I'd ever seen.  They were in all kinds of shapes: stars, angels, animals and wreaths.  They were decorated with coconut, jam, icing and tiny silver balls.  Some of my classmates brought in samples of their mothers' baking.  I brought some biscotti.  My friends were polite and tasted the dry, double-baked bread.  Then we ate the lebkuchen, pfeffernuesse, zimtsterne, and jam filled spitzbuben.  The stollen reminded me of panettone.
I thought a German Christmas was delicious.  I planned to eat German and Italian holiday food every Christmas for the rest of my life.
We helped Sister decorate the Christmas tree with sugar cookies which had been twisted into figure eights.  Then Sister told us to gather around her.  She was going to read us a story.  Sister showed us the picture of Santa Claus and his eight reindeer.  My friends were delighted.
I was confused.
I had never heard any of this before.  Santa was supposed to slide down a chimney and land in a fireplace.  We didn't have a fireplace.  We had a huge, oil-burning furnace in the basement.  Ma hung our stockings, along with all the other wet laundry, on a clothesline near the furnace.  It made awful noises and had fire in it.  If Santa landed in it he'd fry like a strufoli.  That would end Christmas forever.  I didn't think Santa would take such a risk for a total stranger.  The lovely cookies felt like lead in my stomach.
Sister talked about Santa checking his list of good little girls and boys.  Santa had a list?  I knew we were on the Registered Aliens list.  Every January the TV reminded Ma to fill out green cards so we wouldn't go to jail or Malta.  How could I get on Santa's list?  Could Santa get my name from the Alien list?  Did I need to fill out another card?
The afternoon went from bad to worse.  Sister told us we could put our letters to Santa in the special mailbox in the classroom.  A letter?  What language did Santa speak?  He'd never heard from me.  I wasn't on his list.  What could I say?
"Hi, you don't know me, but I'd like some toys."  I'd never written a letter to La Befana.  She just gave me toys.  Would Santa shoot La Befana if she came to College Point?  Oh, boy… I was in big trouble.
In kindergarten we learned about God the Father, about how we should pray to Him and tell Him what we needed.  I didn't need another Father.  I figured if my Pop was always busy working, this guy who took care of everything in the whole wide world would really never have time for me.
I needed a Grandma.
The next time we went to Corona I told Nonni about Santa Claus and that he was in charge of Christmas in College Point.  Nonni listened patiently as I explained the rules.
She repeated the main points, "Santa Claus.  A letter."
I nodded.
"I fix.  I write letter to Befana.  She give to Santa.  No hard feelings.  Christmas come."
I had my doubts.  Nonni had never been to College Point.  Maybe nobody ever had to change from La Befana to Santa Claus.  Maybe Christmas was lost forever, like some of the packages we never got from Malta.
On Christmas Eve we all gathered at Uncle Joe and Aunt Betty's home in Corona.  We had the Christmas Eve dinner.  Then we went to St. Leo's for the Midnight Mass.  Everything was familiar.  Latin and Italian.  Why couldn't we have stayed there?
When we were leaving the church I saw a pale cloud in the sky.  It looked long and thin, with a sort of lump on one end.  For a moment I thought it looked like Santa and his sleigh with eight tiny reindeer.  I kept looking at that cloud.  It followed us from the church to Uncle Joe's house, where we had panettone.  When we left, the cloud was still there.  I watched from the car.  The cloud followed us from Corona to College Point.
I never noticed clouds before.  Did clouds always follow people from one town to another?  Was it really a cloud?  Sister had told us that Santa had millions of helpers, tiny people called elves.  Could it have been an elf picking up the letter from La Befana?
Christmas morning, Pop was eating breakfast while Ma was cleaning Rose.  Ma sent me to the basement to get some dry diapers that were hanging by the furnace.  Being a big sister wasn't much fun.  I pulled down two diapers.  Then I noticed some lumps by the furnace.  I thought some clothes had fallen off the line.  I walked toward the furnace.
But the lumps weren't clothes.
They were boxes.
They were wrapped.
They were presents!
They were for me!!