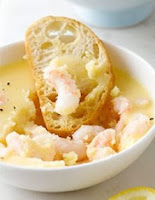 Inspired by the delicious food we enjoyed there, and a few of the traditional food featuring episodes we watched on the British television show Escape to the Country, we’ve been trying English recipes.

A while ago we watched a couple exploring houses in Yorkshire and, lucky for us, the hostess/real estate agent on Escape went to a food shop and sampled the classic local dish, Potted Shrimps.
The shrimps are cooked, placed in a small bowl, and then covered with melted butter.

Potted Shrimps was created when people didn’t have luxuries like refrigerators.
The reason for the butter cover is that it was used as a preservative for the shrimp, as well as for other seafood, chopped meats or cheese.
In the 1826 Housewife's Manual Meg Dods said that game "to be sent to distant places" would keep for a month if potted correctly with a layer of melted butter.

We have refrigerators now, so the preservative aspect isn’t important anymore.
But it’s an easy recipe and can be used as a 'can be done in advance' appetizer.
And it’s delicious, too.

Potted Shrimps can also be served as a Yorkshire Shrimp Tea, by serving it with hot buttered toast, fresh lemon wedges and a pot of hot tea.

Potted Shrimps also has a bit of literary history…
It was a favourite dish of Ian Fleming, who often ordered the dish when he dined at Scott’s Restaurant on Mount Street in Mayfair, London.
Fleming decided that his fictional hero, James Bond, would share his love of this dish.
So, if you’d like to make a theme night of it, serve the Potted Shrimps with a drink that’s been shaken, not stirred.

Some recipes call for clarified butter, which is easy to make.
Gently melt butter in a pot for about 10 minutes, until the milk solids look like they are about to burn. Strain the liquid into a jar, and discard the milk solids.
The strained oily liquid is clarified butter and can be used for frying, since the removal of the milk solids allows it to be heated to higher temperatures without smoking.

The recipe can also be see to make Potted Crab Meat.

This recipe has been around a long time, so of course there are variations.
Some recipes called for a 1/2 teaspoon of anchovy paste or 1 chopped anchovy fillet, or Gentleman's Relish, along with 1 Tablespoon lemon juice.

White pepper, which gives a more subtle flavour, or cloves or cayenne pepper have been included in other recipes.

There’s also a recipe which included a Tablespoon each of lemon juice and finely chopped shallot, in addition to a pinch of bay leaf powder and a dash of Tabasco sauce.

The procedure is the same for all recipes, while the spices are open to variations.
Suit yourself and enjoy.

Potted Shrimp is best made the day before and left in the refrigerator overnight, but it can also be made a few days in advance, which makes sense since the whole point of the melted butter is to serve as a preservative.

You can also serve Potted Shrimps on toast, with pickles on the side.

Cook and peel
12 ounces prawns or shrimps
Set aside.

Place in a small pot
3 1/2 ounces unsalted butter
Melt over a low heat.
Stir in
1/8 teaspoon cayenne pepper
1/8 teaspoon nutmeg
Add the cooked prawns or shrimps
Stir to warm the shrimp through.
Using a slotted spoon, remove the seafood and press them into the ramekins.
Allow to cool, then chill for 10 to 15 minutes or until set.
Reheat the butter and pour it over the prawns to cover.
Place the ramekins in the refrigerator to set overnight.
Heat oven to 375º F

Cut a ciabatta loaf into thin slices, and place slices on a pan.
Brush slices with olive oil (about 1 Tablespoon should be enough for the loaf), and toast in the oven.
Keep an eye on the slices so they don't burn.
Once golden, arrange slices on a serving board.
Serve the bread with the potted prawns and lemon wedges

Hope you enjoyed your shrimp with a York twist.
Here are a few more shrimp recipes:

While we’re exploring Yorkshire recipes I’ll include a recipe for Yorkshire Pudding.
It’s an easy recipe which can add a little something extra to a roast beef dinner, especially if you’re serving leftovers.
But I don't think it would go well with the Potted Shrimps.

Remove hot muffin pan from oven.
Grease 8 of the muffin cups.
Pour batter (about 1/4 cup) into each of the the prepared cups.
Bake 35 minutes.
Reduce oven temperature to 350° F and bake another 20 minutes.
The tops should be puffed and golden brown.
Transfer the puddings from the muffin pan to a wire rack.
Use the tip of sharp knife to cut a slit in each pudding's top to vent the steam.
Serve with gravy.
Posted by Margaret Ullrich at 7:38:00 AM