A Moment with Geoffrey Holder by Margaret Ullrich 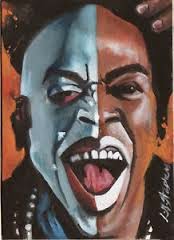 Geoffrey Holder, a Tony Award-winning director, actor, painter, dancer and choreographer who played a scary villain in a James Bond film, died on October 6.  He was an amazing person and performer.

Back in 2002 I wrote the following story for the CKUW radio show ‘2000 & Counting’.
After I read the piece we chatted on air about Mr. Holder, his performance in the James Bond movie, and, of course, his 7 Up commercial.

Some people just live on in everyone’s memory.

Last Saturday we saw the 1973 James Bond movie Live and Let Die.  It brought back memories of one of the most amazing musical experiences we've ever had.  No, we didn't see Paul McCartney with the Beatles or with Wings.

Do you remember Geoffrey Holder - he was the tall dancer with the memorable Jamaican accent who did a voodoo number in the scene where Dr. Quinn nearly got a bad case of snakebite in Live and Let Die.  Maybe you remember him from television.  In 1971 he did a 7 Up commercial where he held up a glass of 7 Up and said: Try getting that out of a cola nut Ha, ha ha ha, ha.

Well, thanks to Geoffrey's bladder I have a 3 degrees of separation connection to James Bond, I mean Roger Moore.  No kidding.

In February, 1981, Paul and I took a trip to New York.  We went strictly as tourists.  None of our relatives knew we were in town.  That's the only way former native New Yorkers can see New York.  We stayed at a nice hotel and got theatre tickets from the kiosk in Times Square.

We saw Superman, Christopher Reeve, with Jeff Daniels and Swoosie Kurtz in Lanford Wilson's Fifth of July at the New Apollo Theatre.  Fantastic.  We also saw Tony Roberts and Anita Gillette in Neil Simon's They're Playing Our Song at the Imperial Theatre.  The songs by Marvin Hamlisch and Carol Bayer Sager were fun.  We bought the original cast album with Robert Klein and Lucy Arnez.

But we really hit pay dirt when Paul got tickets for Duke Ellington's Sophisticated Ladies at the Lunt-Fontanne Theatre.  What can I say about Ellington's music and Gregory Hines and Judith Jamison's singing and dancing?  That alone would've made it a memorable evening.  But the night we went was unbelievable.

The Times Square Kiosk was the way theatres filled empty seats at the last minute.  People could pick up same-day theatre tickets at discount prices.  As long as you didn't have your heart set on a particular show or seat location you could get incredible deals.

Well, there we were with tickets to Sophisticated Ladies in our hot little hands.  That night Paul, dressed totally in brown, and I, in a nondescript drip-dry polyester outfit, got to the Lunt-Fontanne a little early to savour the ambiance of a New York theatre.

Lauren Bacall, Diana Ross, Lena Horne, Pia Lindstrom and Bobby Short were some of our fellow patrons.  And, trust me, they were not wearing nondescript drip-dry polyester outfits.  They were dressed to the twelves, never mind the nines.  I hadn't seen so many diamonds since we'd strolled through Tiffany's.

An insert fell out of my program.  I took a quick look at it.  That explained why everybody who was anybody was there.  We'd picked up some unsold tickets for a benefit performance organized by The Doll League, Incorporated in support of The Dance Theatre of Harlem and The Negro Ensemble Company.  Yeah, we didn't have a clue what they were either.  But there we were, warming a couple of seats with some pretty fancy folks who were all dolled up in tuxedos and designer gowns.  It's a safe bet Lauren Bacall hadn't picked up her ticket at the kiosk.

Then, as if seeing a great show and all those celebrities wasn't enough, during intermission Paul went to the men's room.  He came back babbling like an excited school boy.  "You'll never guess who I was standing next to, right there whizzing, the same time as me.  Guess… you'll never guess.  Geoffrey Holder!"

Well, who'd have thought nature would've called Paul and Geoffrey Holder at the same time like that?  It was a memorable moment, if not a Kodak moment, alright.

I wish he'd gotten an autograph, but maybe that wasn't the right time.  I wish I'd been there… well, maybe not.
Posted by Margaret Ullrich at 6:01:00 AM