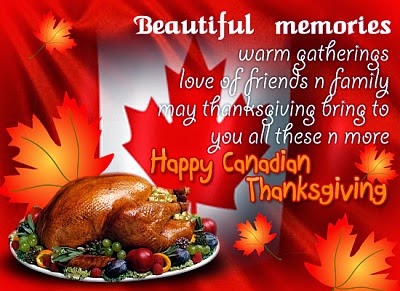 Time flies!!  Next Monday we’ll be celebrating Thanksgiving in Canada.
Autumn has returned to our Canadian prairies.
There’s a chill in the air, and an occasional risk of frost during cloudless nights.

Leaves are turning golden, not red, and covering our lawns and streets.

As I get older I find greater pleasure in celebrating Thanksgiving and find it to be a more important holiday than either Christmas or Easter.
Those two holidays, while important, are weighed down with rituals and expectations.
The huge amount of advertising attached to both have unfortunately turned them into more impersonal, commercialized affairs.


With age comes more appreciation and gratitude for our actual blessings.
Experience has taught us that things can easily go wrong, or be so much worse.
Compared to the things we are grateful for, I feel that over the years the religious stories, while important, can lose the power to touch us.

Our Thanksgiving isn’t the start of the holiday shopping frenzy that the American Thanksgiving is.
Christmas is still nearly three months away.
Harvesting conditions for our farmers were recently in the news.
And those with home gardens can add their homegrown produce to the feast.

Oh, about the frost at night, Green Tomato Pie takes care of a few tomatoes!


We're in for something a little special tonight.
The full moon will also be a blood moon.
Remember the red moon we saw back on April 15, 2014?
Well, it’s back.
And we’ll see it again on April 4 and September 28 next year.
It’s called a tetrad - that’s four successive total lunar eclipses, each of which is separated from the other by six full moons.
Now you know.

Oh, there’ll also be a Mercury Retrograde from October 4 to October 25.
Mars, Saturn, Mercury, Venus and Jupiter are going to be the five brightest planets visible in the October night sky.
There’ll also be two meteor showers: Draconids and Orionids this month.
These notes might help you enjoy the show.
Think of it all as something to observe during an evening walk, especially if you don’t like the new television shows.

According to the folks at astrology.com:
There is a total eclipse of the full moon on October 8, 2014. This is the Northern Hemisphere’s Hunter’s Moon. It’s also a Blood Moon.  The lunar eclipse harkens back to last April, so expect circumstances that first arose then to come back for review in a very powerful way!

The eclipse carries with it currents of upheaval and an energy that can bring very disruptive and exciting experiences from out of the blue.
There will be a lot of excitement. There is a lot brewing. You might be noticing it already. Your heart may be feeling it.
Calm down. Relax.
Posted by Margaret Ullrich at 6:24:00 AM