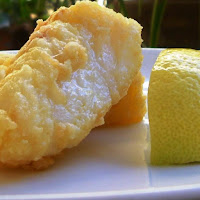 Back in November I wrote a bit about an old fashioned Christmas Eve, Sicilian style, which featured The Feast of the Seven Fishes.

There are a lot of fish swimming in the sea.
Something for every taste.
Lots of them land on the table on Christmas Eve.

Yes, well, along with the tasty fresh fish - and the eels - there was a dish that was included more for its sentimental value than its flavor.

If you've never seen Baccala up close, Monty Python's John Cleese compared it to a cricket bat.
That's about right.
A white, flat, slightly fish-shaped bat.
And about as hard and dry.

Now, Italians aren't crazy.
Nobody sits down to Baccala as is.
Like anything old fashioned, it takes a bit of work to prepare.

In the Holidays chapter in Carmela's Entertaining with The Sopranos, Carmela has a recipe for Baccala Fritta, Fried Salt Cod.

To be honest, I think she orders some in from some chi chi place in Little Italy in Lower Manhattan.
I mean, Carm's way too busy, what with building houses on spec and having the hots for priests, mafia boys, repairmen, etc.
Soaking dry cod?  Pul-lease....

Baccala Fritta is not something you can whip up at the last minute.

A couple of days before you want to cook it, place the baccala, cut into serving pieces, in a large bowl of cold water and refrigerate, changing the water at least 3 times a day for 2 days or more - until the water no longer tastes salty.
Then you drain the baccala and dry it with paper towels.
You can leave the baccala in the refrigerator for a day or 2 after it's desalted.

Or... you can use fresh or frozen cod fillets, thawed.
I do.

For 1 1/2 pounds of prepared baccala:
Beat in a shallow bowl
4 large eggs
3 tablespoons flour
1/2 teaspoon salt
a dash of pepper
----
Place in another bowl
1 cup flour
----
Heat in a large skillet over medium heat
1/2 inch of olive oil
----
Coat a piece of fish with the flour.
Dip the fish in the batter, coating completely.
Repeat.

Fry the fish, a few pieces at a time, without crowding,
until golden brown (about 4 minutes) then turn and
brown another 3 minutes.
Drain the fish on paper towels.

Would I make the Baccala Fritta again?
Nope.

Another recipe down.  Thirty-two more to go.
Posted by Margaret Ullrich at 9:00:00 AM