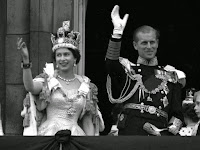 The British Royals have been in the news recently, what with the birth of Queen Elizabeth’s new great-granddaughter, Princess Charlotte.

In 1952 Elizabeth II was crowned Queen.
In honour of the occasion, Constance Spry and Rosemary Hume invented Coronation Chicken.

Coronation Chicken, an easy chicken salad recipe, may have been inspired by jubilee chicken, which had been prepared for the Silver Jubilee of Elizabeth’s father, George V in 1935.
For the Queen's Golden Jubilee in 2002, a second Jubilee Chicken recipe was created.

I know... you’d think they’d have a fancy beef roast, like a crown rib roast.
Maybe the royals just like chicken salad.

As Malta was part of the British Empire, the recipe found its way to Malta.
It was printed in Maltese newspapers and magazines.
A clipped recipe was sent to Ma when we were living in New York.
So, as British subjects, we were able to celebrate the coronation properly.

If you’d like a bit of crunch, lightly toast a few almonds, let cool, chop and add.
You can also use flaked almonds, toasted or not, if you have some in the pantry.
You can add raisins in addition to, or in place of, the apricot jam.
If you’d like a deeper yellow colour add a bit of turmeric.

This can be prepared the day before you need it.
The flavour will improve if you give it a bit of sitting time.

This can also be used as a filling in Cream Puffs which looks a bit festive.
Or you could serve it over cold rice as a buffet dish.
Not as pretty, but good.

In a large saucepan heat over low heat
2 tablespoons olive oil
Add
1 small onion, finely chopped
Cover and let cook for 5 minutes until the onion is soft but not browned.
Stir in
1 tablespoon curry powder
Cook for another 2 minutes.
Add
1/3 Cup chicken stock
1 teaspoon tomato paste
1⁄2 lemon, juice of
2 - 3 tablespoons apricot jam
Stir until the mixture begins to bubble.
Simmer for 5 minutes, until the mixture thickens.
Allow to cool for half an hour.

Stir in
1 Cup mayonnaise
3 tablespoons heavy cream
Add the diced, cooked chicken and mix throughly.
Cover and place in the fridge.
Let it age for a few hours for the flavours to meld.

Put the filling on bread to make 8 sandwiches.
Quarter the sandwiches and arrange on a platter.


A nice pot of tea would add the right touch.